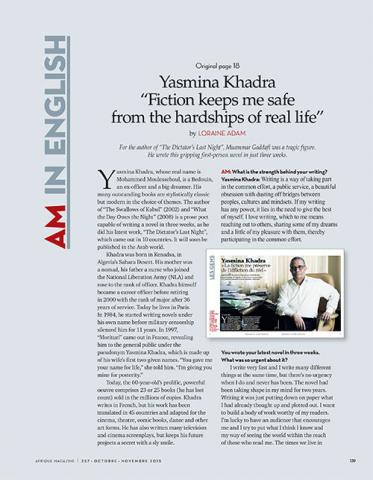 Yasmina Khadra, whose real name is Mohammed Moulessehoul, is a Bedouin,an ex-officer and a big dreamer. His many outstanding books are stylistically classic but modern in the choice of themes. The author of “The Swallows of Kabul” (2002) and “What the Day Owes the Night” (2008) is a prose poet capable of writing a novel in three weeks, as he did his latest work, “The Dictator’s Last Night”, which came out in 10 countries. It will soon be published in the Arab world.

Khadra was born in Kenadsa, in Algeria’s Sahara Desert. His mother was a nomad, his father a nurse who joined the National Liberation Army (NLA) and rose to the rank of officer. Khadra himself became a career officer before retiring in 2000 with the rank of major after 36 years of service. Today he lives in Paris. In 1984, he started writing novels under his own name before military censorship silenced him for 11 years. In 1997, “Morituri” came out in France, revealing him to the general public under the pseudonym Yasmina Khadra, which is made up of his wife’s first two given names. “You gave me your name for life,” she told him. “I’m giving you mine for posterity.”

Today, the 60-year-old’s prolific, powerful oeuvre comprises 23 or 25 books (he has lost count) sold in the millions of copies. Khadra writes in French, but his work has been translated in 45 countries and adapted for the cinema, theatre, comic books, dance and other art forms. He has also written many television and cinema screenplays, but keeps his future projects a secret with a sly smile.

AM: What is the strength behind your writing?
Yasmina Khadra: Writing is a way of taking part in the common effort, a public service, a beautiful obsession with dusting off bridges between peoples, cultures and mindsets. If my writing has any power, it lies in the need to give the best of myself. I love writing, which to me means reaching out to others, sharing some of my dreams and a little of my pleasure with them, thereby participating in the common effort.

You wrote your latest novel in three weeks. What was so urgent about it?
I write very fast and I write many different things at the same time, but there’s no urgency when I do and never has been. The novel had been taking shape in my mind for two years. Writing it was just putting down on paper what I had already thought up and plotted out. I want to build a body of work worthy of my readers. I’m lucky to have an audience that encourages me and I try to put what I think I know and my way of seeing the world within the reach of those who read me. The times we live in speak to my conscience. I’m trying to understand them, to shed at least a little light into the dark corners of the political and cultural upheavals that are shaking human relationships. I have two cultures, Western and Arabic-Berber, as well as a certain amount of experience on the ground. I’m trying to help people understand each other. I can tackle any issue, any world — except science fiction — and fill it with serenity. Literature is my homeland, my refuge, my asceticism. Fiction keeps me safe from the hardships of real life, protects my hopes and my love for people.

“The Dictator’s Last Night” recounts Gaddafi’s last hours in the first person. You’ve never been to Libya and met the ex-dictator just once, on an official visit to Algeria, yet everything in it rings true.
Flaubert said, “Everything we make up is true.” That’s the magic of writing. Perhaps there’s some legitimate claim I can make to writing about the Libyan leader. My roots are Bedouin. I was born into a desert tribe, and I’m North African, Arab-Berber and Muslim, like him. Gaddafi wasn’t totally foreign to me. Not only that, but he also corresponded to the literary character I cared about. The tragedy I wanted to write fit him like a glove. Nothing has really changed since Sophocles. The same dramas and the same absurdities speak to us, as though each generation has claimed its share of tragedy. We haven’t learned a thing. All the cataclysms that have shaken our world throughout the ages have done nothing to wake us up. To me, Gaddafi is the child of King Lear, Oedipus, Antigone. I even based my text on the idea of the three unities: place, action and time. Above all, I want it to be a literary work with its language, its soaring moments, its brilliant flashes and its inventiveness. There was a real interest in the character. He died before we could hear him explain his reign and his crimes. The novel tries to fill that gap.

Are you a political writer?
No. Only people who are physically on the ground and share the world’s misery really are. I’ve got enough trouble as it is with my own misery and struggles. I’m a novelist who tries to be worthy of his readers. Of course, I pay attention to what’s going on around me. I write to tell stories about people, their miracles and their hardships, their joys and their sorrows, their dreams and their disillusionments. I don’t like injustice, humiliation, manipulation or lynching. I want my writing to be healthy and deeply human. If it manages, in places, to serve a purpose, that reassures me and makes me feel proud.

You had some harsh words about the Arab Spring.
I got a lot of flack about my lack of optimism during the Arab Spring. Of course, I was glad to see the peoples overthrow tyranny, but I was also worried about their legitimate, spontaneous anger and wondered whether it would be followed up with ideas. I already knew — not because I’m more clear-sighted than anybody else but just because I have an insider’s insight — that it was going to lead to bedlam and chaos. It was even obvious. You can’t topple tyranny and establish democracy overnight unless there are leaders who are strong and persuasive enough to rally an entire people around a common ideal. But that wasn’t the case. There was neither a roadmap nor a convincing project for society. There was sheer anger, which eventually died down, setting the stage for lawless, reckless opportunists who cared about nothing but themselves. The peoples must go back to the drawing board and show the militias and adventurers ruining the country who’s in charge. Indignation is an admission of weakness.

What’s the next step after indignation?
The first thing is to condemn selective indignation. We face a common enemy. Solidarity is becoming imperative. Deploring the loss of our loved ones and compatriots is not enough. All the victims are equal, and no death is more important than another. When that’s understood, perhaps something can be done. We must aspire to a shared human ideal: world peace. Every people wants a normal life. Every family wants to keep its loved ones, watch them grow up peacefully, go to school, go to work and quietly retire. But everybody’s being lumped together today, supplanting reason. The barbarians’ hatred is being joined by that of the “offended” and fear and the denial of the other is replacing clear thinking.

What are you optimistic about?
There’s turmoil, conflict, friction. That’s normal. The world is not perfect. Neither prophets nor poets have succeeded in making us any wiser. Where some are putting up monuments, others are building gallows. That’s how things balance each other out. If I’m still optimistic, it’s because humanity has always managed to overcome cataclysms and wars. History shows us that barbarism never prevails. We can’t just throw up our hands and say, “there’s nothing we can do”. We must take control of our destiny. I believe in conscience, even if it is marginalised, vilified, disparaged. We’re going through a period where appearances are triumphing over reality. Image is becoming more important than conviction; lies trump learning. But nothing is completely falsified or lost. Humanity will know how to survive its own flaws and restore the virtues and values leading to redemption. Common sense has always prevailed. It’s going through some tough times today but it’s not giving up. Its miracles lie in its resistance.

Is living in France a form of exile for you?
My biggest readership is in France. I feel at home here. Without readers, a writer is a dead letter. My readers give me the strength to carry on loving and believing. Of course, Algeria is still very close to my heart. I plan to go back there to live out the rest of my days. I’m like a salmon. The turmoil of the oceans does not make me forget the peacefulness of my native river.

Why did you run for president in your country in 2013?
To not settle for just writing. I wanted to be in the thick of the opposition, to tell the regime it’s time to make way for other ideas about what the future will look like. I have no desire to become president. All I did was to push my civic duty to its logical climax. I’m perfectly content with being a writer. I’m free and happy and don’t decide anybody’s fate. Algerians have suffered for centuries. They’re a magnificent, endearing people and deserve their share of happiness. It makes me very sad to see them becoming fossilised in stoicism and renunciation. They have no right to give up after so many deaths and sacrifices. 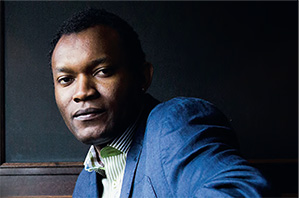 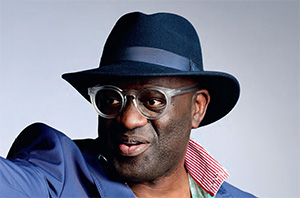 With an onrush of jostling words, the writer and poet from Pointe-Noire has written one of the year’s most noteworthy books, “Petit Piment”.